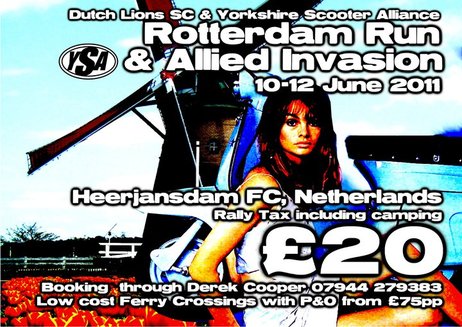 Thursday dinnertime had arrived and it was time to get ready, saddle up and meet up with our scooter club members, before the journey to my place of Birth, Hull.Weather looked decent as 7 lammies, Mick Kong on his newly acquired GT250 and two support vans headed east towards Howden.By the time we got to Hedon Road Hull it was four oclock and scooters were converging on the Ferry port from all directions. After the formalities of booking in, securing the scoots, finding the cabins and freshening up, there was only one place we needed to head for, the bar.This year it was noticable that the ferry security were more active especially when some of the Harrogate and Grimsby fraternity were on the dance floor. Dancing without a TShirt on or jumping on the stage is definitley frowned upon on this boat!After a boisterous few hours it was time to hit the sack. Not that some of us got any sleep. This isnt the first time I have had to sleep with noisy snoring rottwiellers in my cabin. 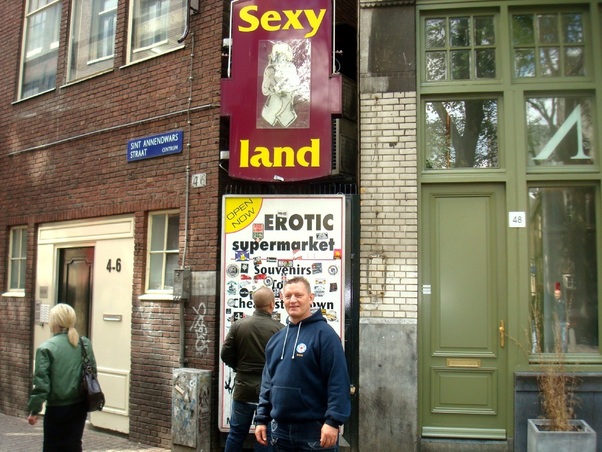 Anyway day dawned and after a expensive but hearty fryup, it was time to head for the car deck and unleash the lammy.You would think we would learn after doing this four times, but people would insist in starting their scoots long before leaving the ships hold. By the time I left, I was enveloped in a bank of two stroke fumes.We also caused mayhem outside the ferry gates as we assembled for the marshalled ride to the campsite, much to the annoyance of the local constabulary. 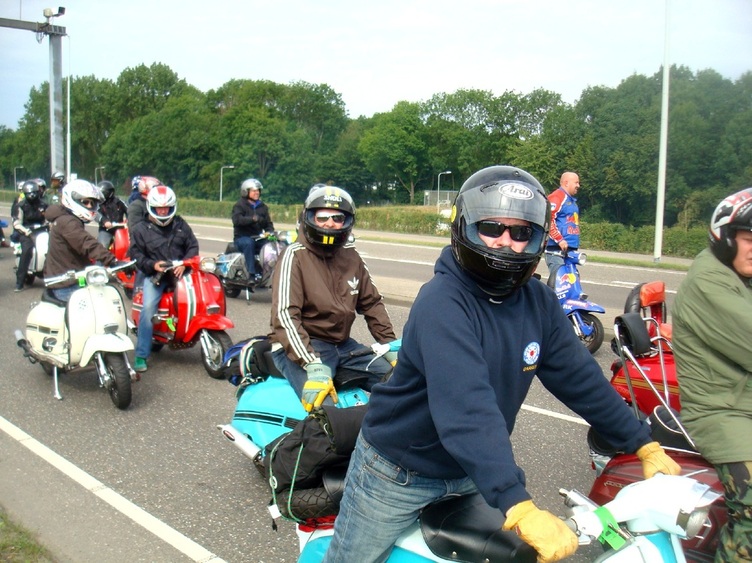 This year rather than travel for thirty minutes on the A15 Motorway and lose people, we would instead travel on an alternative route to the campsite. Sounded good, but it meant over 200 scooters and a dozen cars and vans had to negotiate traffic lights, roundabouts, bridges that opened, speed bumps and pedestrian crossings and somehow keep together. A nightmare.We eventually arrived at the campsite within Heerjansdam Football Stadium , booked in and got the tents up. By the time we had settled in with liquid refreshments, it clouded over and rain set in for the remainder of the day. Time to sample some of the facilities provided by our good friends the Dutch Lions as well as in the village. It was only five oclock and the village pub was packed out, as was the local Spar and takeaways. All good for local commerce I guess. After sampling the local village hospitality, it was back to the Clubhouse at the campsite to listen and dance to the Dutch and YSA Djs.Music went on into the early hours and no sooner than when everyone had retired, it was daybreak.Saturday arrived sunny. After breakfast, I decided to have a day in Amsterdam and admire the wonderful scenery. The architecture was amazing, especially the windows and large doorways. It rained for a good deal of our visit, so as you can imagine we spent a lot of time in Bars and Coffee houses.
Apparently the weather was kinder in Heerjansdam, which allowed the famous tunnel rideout and games to take centre stage. No doubt someone will elaborate on what exactly happened.By the time we got back from Amsterdam, it was after ten oclock. Got back in time to hear Stubby behind the microphone before they finished the night with some more top tunes from Dukesy and Co.Sunday morning arrived all too soon and by noon most of the 500 plus campers had departed for other locations on route to their ferry ports.This time we headed for the motorway and made the direct route back to the Ferry port.Everything was going well until a member of our club decided to breakdown in the middle lane of a 1.2 km tunnel. How he survived the constant fast flowing traffic that was behind him I will never know.We arrived early at the little pub near the ferry gates of the Europort. Within an hour it was crammed with scooter clubs waiting to board the ferry. For three or four hours, we enjoyed the afternoon sun, whilst we drank, ate and socialised with the rest of the Yorkshire fraternity. A nice way to while away the hours waiting to embark the ferry.Soon we were all back on board heading for old blighty. I must of been feeling my age, because after two or three lagers, I was ready for bed. Plus I wanted to get to sleep before the rottweillers started snoring. It didnt work. They just woke me up with their monotonous nasal sounds.For some reason Customs and Disembarkation took an age when we departed the ferry. We eventually regrouped, headed for our customary breakfast stop in Hull and then headed west  for home.
Yet again we enjoyed thoroughly ourselves, taking in the Dutch hospitality and sampling what Holland had to offer. The weather wasnt too bad and I believe everyone got home safely.I would like to thank the Dutch Lions SC for being the perfect hosts and all those within the YSA for working hard to make it all happen. Most of all thanks to all the Scooterists for being there and making it such a memorable event.
Derek.YSA

A big thank you to Derek for his story and pictures,  Below is a bit from Scouse about his Saturday trip out and thanks to him for these words. (Doe)

Up bright & early saturday morning with the intention of going on the rideout, put my head out of the tent & it didn't look good, dark clouds everywhere, decision time I thought, go to Amsterdam where Derek & the rest of the Selby Moving Targets or stay & hope it gets better.
By 10am it still hadn't cleared up so I decided to make the trip with Derek & co.
We walked to the train station, which took about 25 mins, once there it were a nightmare trying to work out how to use the ticket machine, in the end we gave up & decided to pay once on the train only to be told by a Dutch lady that we could end up with a 35 euro on the spot fine for not having a ticket, this put me & Chris "banksy" Banks right off getting on. :-) the rest took a chance & as it turned out it were the right decision.
The weather had started to improve so me & banksy decided to go back for the ride-out, made it with 5 mins to spare.
11:30 & off we went, looked like over 100 scoots, first stop, petrol station, once everyone had filled up off we went again, the ride were just over 11 miles & I must add, it were very well marshalled by the Dutch Lions guys & girls, we didn't have to stop at 1 junction or traffic light all the way along, well done Dutch Lions.
We reached our destination in about 20/25 mins, can't remember the name of the village, & went into a little car park, everyone parked up & headed to the cafe situated in the far corner, I were lucky & was one of the first in & managed to get & a sandwich & a cup of coffee, just tucking into it when one of the Dutch Lions chaps rushed in & said " quick, we got to leave, they've called the police", little did we know but we were supposed to pay to park but none of us had so the chap on the gate had called the police .:-) a mad rush then developed as everyone tried to get back to their scoots & get out of there.
We took the same route back & once back at Heersjamdam I thought we were going to go back into the campsite but they went straight past it, it turned out we were going to the tunnel, what a buzz that place is, throttle wide open both ways, scoots were flying & the noise were deafening, back to the campsite & everyone were laughing about what had just happened, crazy.
Hungry now so me & banksy decided to go to the village for something to eat, there were a little van there selling freshly cooked sea food, we both got some, me calamaries & banksy some fish balls in batter, sat & scoffed the lot, lovely.
Once fed off we went to the pub, the place were heaving, must have been because the weather had really improved & the sun was well & truly out, sat outside & ended up staying there for nearly 4 hours, the atmosphere & banter were brilliant.
Back to the campsite & get ready to party again at the club house.
Saturday looked like being a bit of a bummer but ended up being a great day for me, & I'm sure a lot of others.

D/W
Once again the club set foot in Heerjansdam. This year 11 members made this the fourth outing to this popular event.A painful two hour ride to the Campsite within the football ground had to be first undertaken. Thankfully the heavens didnt open until we had pitched our tents and were into our first can of lager. Then it was off to the Village to sample the delights of the village pub and the chinese takeaway. It rained continuous until the morning. On Saturday some of us venture into Amsterdam to observe the marvelous architecture and canal boats, whilst others enjoyed the famous rideout through the tunnel. Sunday was a better day as we limped back towards the Ferry port, nearly losing Andy in the Motorway tunnel. I will let him tell you all about it. Good trip. You missed a good un. Stu.