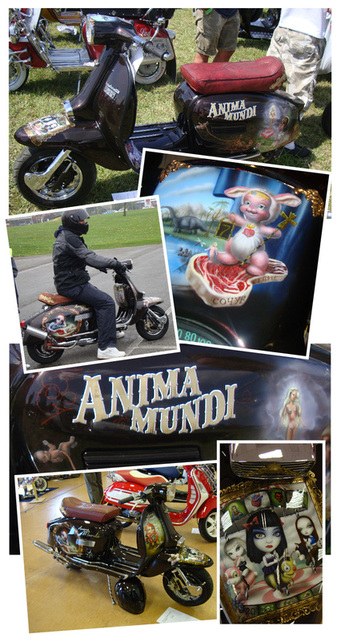 The Garage Artwerks might be a new name on the 'custom scooter scene' but the guy behind the name certainly isn't. Colin Fitzgerald (Nooch as he's known on the YSA forum) has been doing artwork for some time and many of you will no doubt have spent time looking at his own machine at rallies/rideouts. His 1970 GP 'Anima Mundi' is probably one of the finest examples of custom airbrush work around and the attention to detail is superb. The work is taken from Mark Rydens art, an American artist who came light in the 1990's who now has his art shown all over the world.


'The scooter will not be seen much next year' says Col as he thinks the work has run it's course and is due a revamp (I'm already waiting anxiously to see the new work).


'I got in to art mainly through my brother as he was good at art and I wanted to be like him' (also I must add that Col's grandad was a signwriter so art runs in the family). It's not just scooter work in Col's portfoliio, he also does portraits but obviously with the love of scooters he turned his hands to airbrush work and when you see his work you can understand why he's getting busier each week.  After some issues where he was working full time Col decided that maybe it was time for a change and thought now would be a good time to go self employed and take up one of his hobbies as a full time job, especially as he was getting asked more and more to do custom paintwork and also pinstriping and custom seats/saddles (so not just paintwork on his list of skills). 'Scooters came in to my life after seeing Quadrophenia and also seeing a GP riding round town regularly' ,something a lot of us can relate to!


I asked Col which was his favourite piece he has done, of course he said his own scooter 'Anima Mundi'. 'The artwork came out as I wanted so I have to say it's my favourite work, that doesn't mean I don't like any of the other works I have done, it just means it was what I wanted' (Think I understand mate,it's always better when it's Your's).
One project he's on with at the moment is a GP done in the theme of band 'Carter The Unstoppable Sex Machine' and tells me the scooter will be going on tour with the band and the side panles will be signed by them too.


Other work he has done include 'RatFink',Working Class,Wena Wora Lad,Roob's Pure Seduction,What Is And What Should Never Be(Led Zep themed) to name a few and I'm sure lots more to come next year and beyond.
'It's nice to have people tell me what they want and indeed what they expect when I do a paint job but it's equally as nice to be given a free hand also' explained Col. 'Not everyone knows excactly what they want, they just have idea's and colour schemes in mind but if they give me an idea of what they require I can work round that and hopefully turn out a better than imagined job for some'


His next 'own' project could see him doing something very different, possibly a classic LD or Puch. 'I fancy doing a real classic scooter like an LD or Puch, be a nice change for me to do something other than the standard custom scoots like GP's and Vespa's,not that I don't like them of course I do but it'll be a new challenge for me'.


So is The Garage Artwerks the place you should visit for your next custom paint job?  You bet it is. Colin told me now it's his full time job he finds his work is improving no end and instead of trying to keep his eyes open working til the early hours he can concentrate better. 'Starting up on my own when I did in July this year was the best move I've made,People kept telling me to do it years ago but the time wasn't right, now it is and I really enjoy myself at work'.


Can't fault you Col, sounds like you're going to be a very busy lad next year mate, keep turning out the fantastic work and I'm sure the trophies will follow.