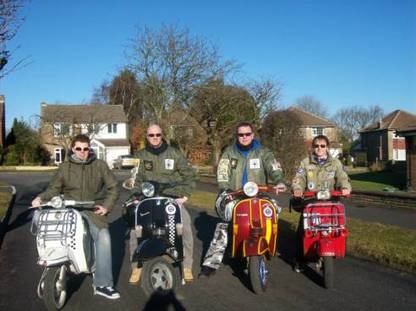 Horsforth Scooter Club was formed by Ian and Andy at the end of the 2009 scootering season. Both being former members of Yelto in Otley the pair realised after a few beers one night that Horsforth had no scooter club since Horsforth Pheonix disbanded.
After several discussions and advice from Roy at Yelto it was decided to give it a go and the designing of club logo etc began. Ian and Andy decided that their last few ride outs of the 2009 season was going to be under to guise of Horsforth Scooter Club and the patches and logos were sewn onto the jackets for all to see.
With only a couple of rides left we were very happy with the response we got from other clubs and would like to say a big thank you for making us always feel welcome at every ride out / Club event we went too.

With the start of the 2010 season now on the way and Horsforth Scooter club up and rolling with 6 members on the road and 1 with his scooter refurb well on its way if he can find all the bits scattered around his front room things are looking good for Horsforth Scooter clubs first full season together.
The emphasis is on fun and friendly chat and banter normally at the expense of a few of the members. The club meets on the first Wednesday of every month (for now) at the Fleece in Horsforth around 7.30pm. New members are always welcome, as are independent scooterists.  We have regular ride outs and support other clubs, both locally and nationally.Whether you ride a Lambretta, a Vespa or another kind of scooter, one thing is for sure, you'll be made most welcome! The important thing is that you’re interested in scooters.