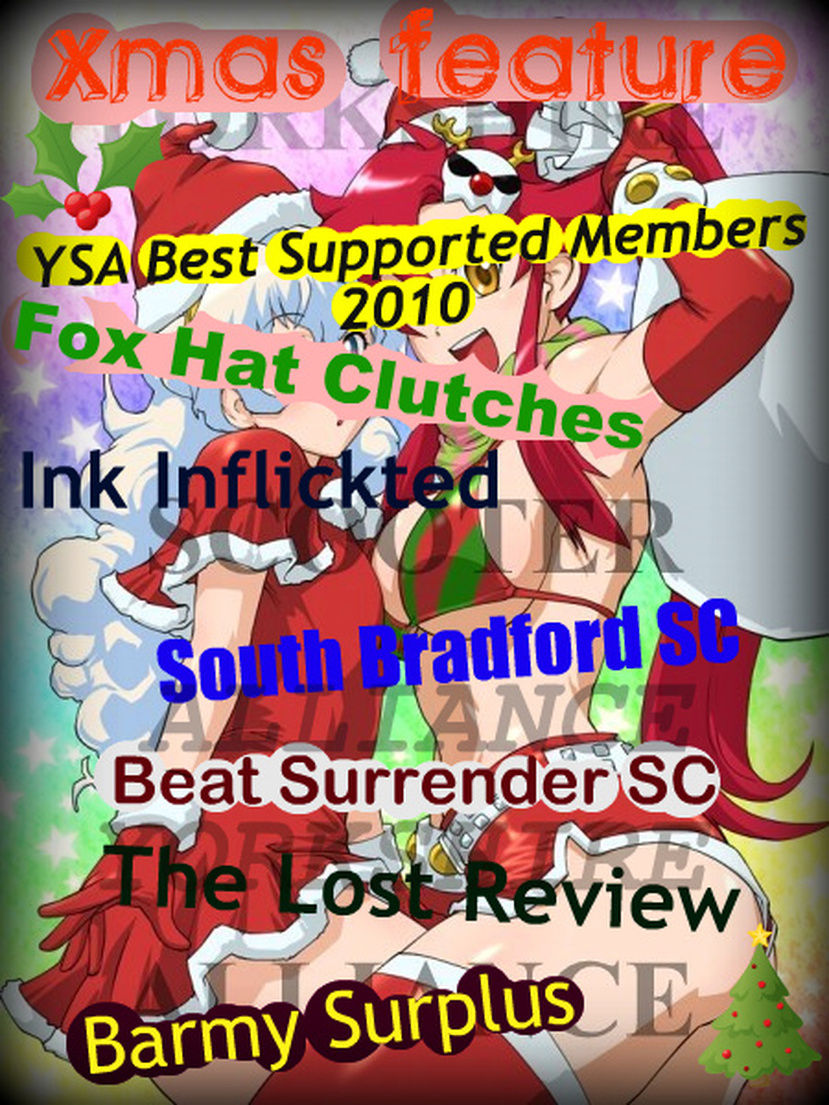 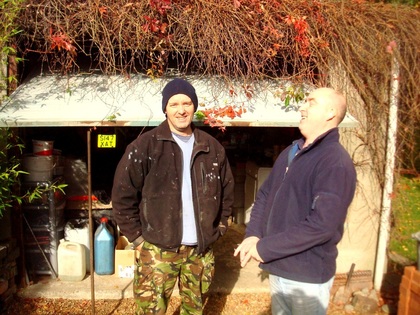 Anyone that has ventured across to Arthur's shed in York, or Art as he is more affectionately called, will know we arent dealing with mere amateur scooter enthusiasts. Oh no.

As their lambrettas and an array of tuned pipes and mikuni carbs reveal, these guys know their onions when it comes to scooters. Yet as they will often like to tell you, " this is not a business, its just a hobby that we love".

Brothers Alan and Art have a good relationship when it comes to working at their hobby. Art has a long history in the motor vehicle trade. He has worked on race bikes, motor cross machines and Lambrettas for over thirty years. His technical knowledge is staggering and looses me everytime he talks about anything to do with two stroke. Alan is a builder by trade and has messed about with scooters, since he was a lad in the mid seventies. He is the driving force and can often be observed working over an engine casing whilst Art gives instructions and imput.

Their reputation for lambretta tuning and engine rebuilding know no bounds, with people patronising their humble establishment from all over the country. Having been to Art's Shed several times, its indeed an education to watch the brothers at work, but be warned. If you want something doing, wether its a power jet fitted, an engine tuned or even a fuel tap or back brake cable fitted, dont expect it to be done in a hurry. Its not that they are slow. Its more that they are very meticulous at everything they do. As far as they are concerned if a jobs worth doing, its worth doing right. Art can often be explaining technical jargon to you, that is way above your head, whilst Alan is constantly harranging Art to stop talking and get back to building up someones gearbox or Crankshaft and top end.

approach to those that enter their shed. Its worth noting that if, like me, you suffer from a weak bladder, this is not the place to be, as you will be expected to drink copious amounts of Tea whilst they are working or just chatting

There cant be many that havent heard or come across the brothers exclusively made Foxhat Clutch assemblies. Art spends an awful lot of time at Rayspeed and has a special relationship with Scott, Ray and Ben Kemp. He also has had valuable imput on the current scooter racing scene.

So if you have a few hours to spare and you want to look at some decent tuned scooters and listen to some words od wisdom from Art whilst drinking lots of tea, can I be so bold as to suggest you go across to Acomb in York and seek out the Dixon's friendly establishment. As they will tell you " Its only a hobby you know".
In finishing you may be wondering whats this Foxhat all about. Simply it leads on from an expression of surprise at something that can move at speed very fast.       " What the F..ks that?? Foxhat! 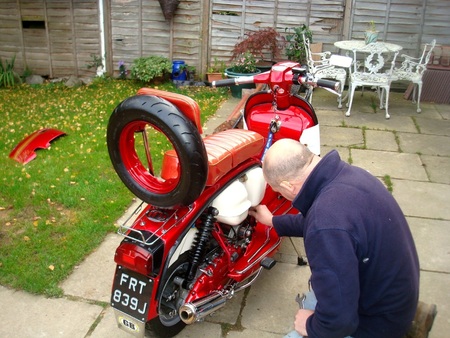 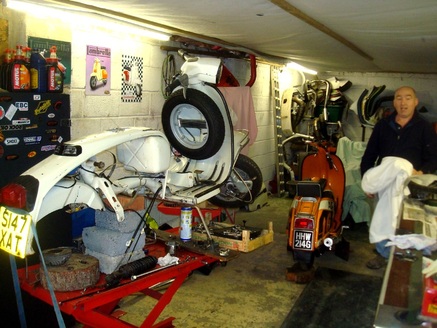 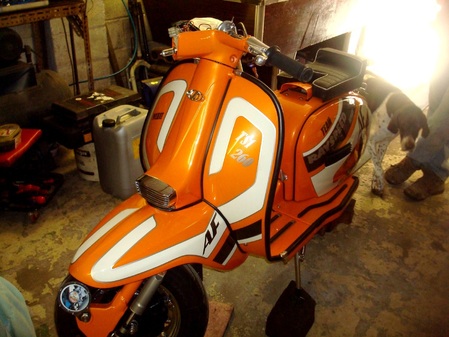 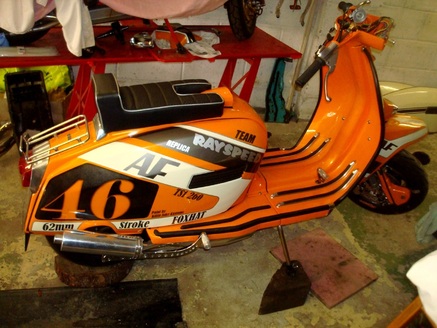 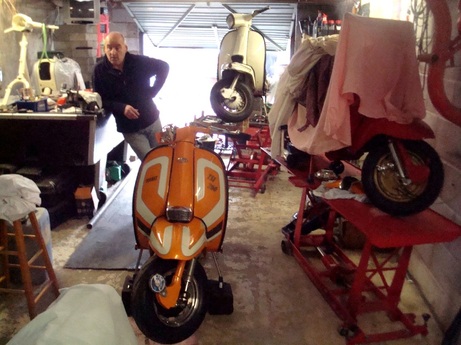 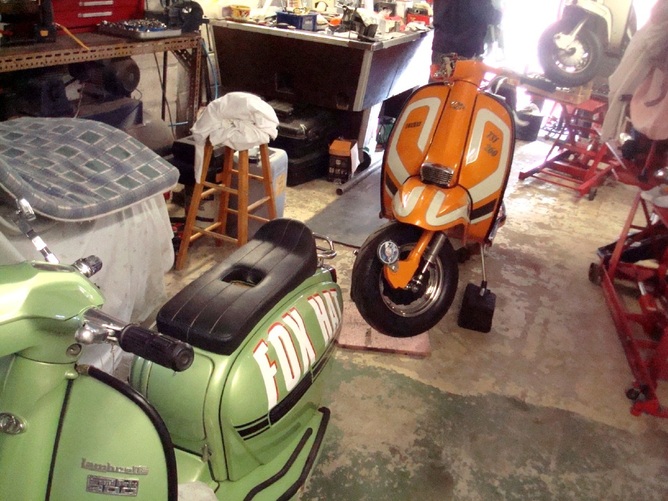 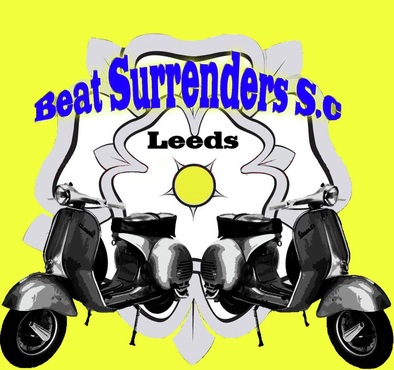 Beat Surrenders sc is Leeds newest club and was formed in September 2010 by two Leedsallstars members in Chris "Clippo" Clipsham and Graham Bilton. Graham first became a mod in the 80s mod revival at the young age of 15 year old but it wasnt till February 2010 at the age of 38 thats Graham bought is first scooter a vespa px 125 when we asked graham what he thought about the scene is answer was "ITS A WAY OF LIFE AND ALWAYS WILL BE " Chris was never into the scene until 6 years ago at the age of 24 when he went intothe local newsagent and bout that months issue of scootering two days later he went and bought his first scooter!!a vespa gt auto and has never looked back since .

The club now as 4 proud members they meet every thursday night at the LEODIS public house in crossgates leeds. All clubs and new members are always very welcome. Graham and Chriswould personally like to thank Leedsallstars member Craig " CRAZYHORSE" Pell for the design of the club badge, and to club member Joanna"bendy" Taylor for the making of the club banners and flyers 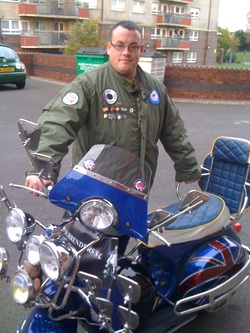 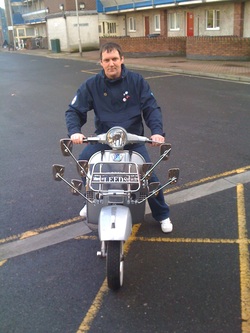 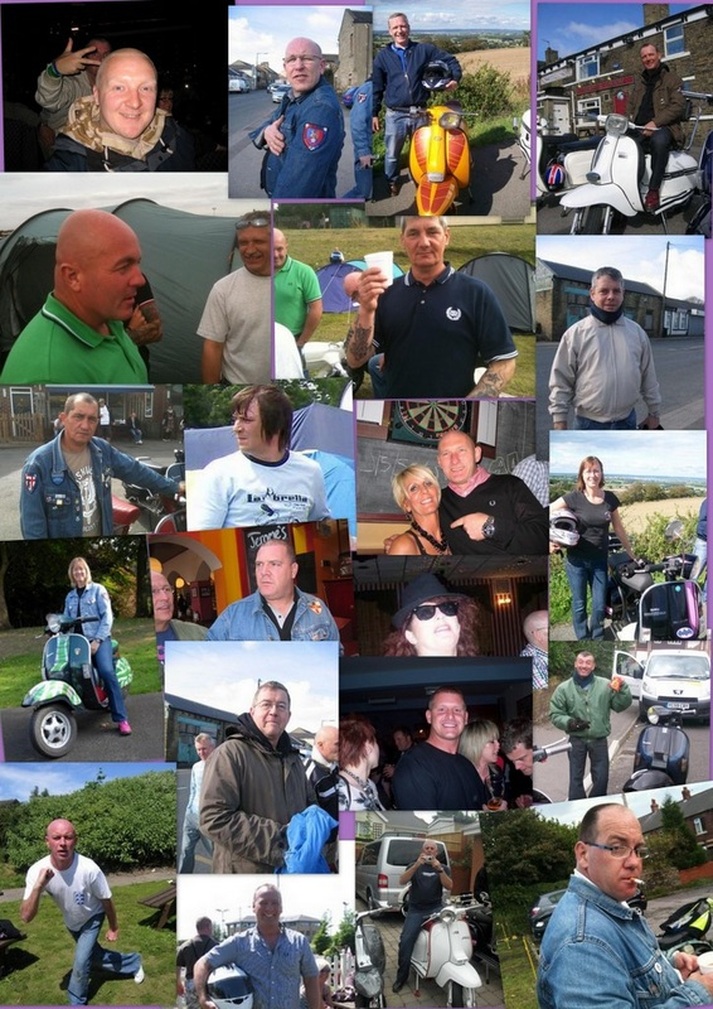 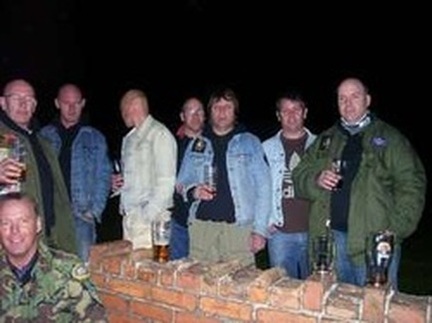 With the summer over and the cold winter evenings upon us, finding somewhere to go on a Thursday night was becoming harder. As with a lot of clubs, meetings became less and less attended, and here we were, 7 scooterists, happy to attend a few rallies, visit a few clubs and like nomads be of "No fixed abode"

I don’t remember who suggested forming a new club, not everyone wanted to, quite happy as we were, just having N.S.A. fun. But a few wanted to, why not, everyone likes to be identified, a sense that you belong in a group, you need to be with others...scooterings a funny old game.

First thing we needed was a name and a badge, we decided the following week we would decide, everyone was asked to supply a few ideas, ideas of a name and if possible some sort of scribble, as rough as u like for a patch, a design relating to a name would be even better!

The following Thursday we piled ideas into the middle of the table, voting on a name, "South Bradford" narrowly made it as the favourite, beating "The Wibsey Wander`s" or "Unit 11" or something stupid. Then came the Badge, it was down to 2 designs, we decided to have some of both designs made and take it from there, not wanting to fall out before the club actually got going.

So that’s where it started, November 2008, in the lounge of the Horse & Groom, Wibsey. South Bradford Scooter Club was formed, 7 members agreeing to pay £20 as a joining fee, this would pay for the first round of patches, we would run the club democratically, no No. 1, no rules, just turn up and do what you want, the task now was to create a web site, get it on the YSA and that’s it, plain sailing from now on!!!

Over the following couple of weeks, things started coming together, the patches arrived, the web site created, although we didn’t have any pictures to put on it! It was a start, people began to hear about us, and we were looking forward to our 1st full season of rallies, as a club, with an identity, not just them couple of solo riders who came over or went there...

New members started joining, don’t get me wrong, there wasn`t a mad rush to join, but scooters being outside the Horse and Groom every Thursday attracted a steady trickle of solo riders, we were getting 15 to 20 scooterists in the Groom most Thursdays, the pub was getting busier, not just with us, but the Thursday night Quiz was attracting more and more, it became apparent that if we ever wanted to arrange a Multi-Meet, this was not the place, we needed somewhere quieter, the obvious choice was the WMC next door, not only very quiet, as most clubs are these days, the tax man and smoking ban has seen to that!

We approached the committee, we`d have to join, but they were keen to have us there, and it was a win-win, injecting a little business into the WMC and we would have a place big enough to hold a multi-meet, arrange a "Scooter Do" and also get cheaper Beer!!!!


So that`s us, South Bradford Scooter Club, meeting every Thursday 7.30pm at Slackside WMC. Beacon Rd, Wibsey. We now have 22 members, all have scooters of course... with a healthy mix of Lambretta`s and Vespa`s, sadly no GTS`s yet!!!...members who have been into scooters since the 70`s, a lot from the 80`s and some who have just got into it, being former members of clubs like West Riding, Dirty Mills, Bob Cats, St. Georges, Road Runners, Gemini, Kinky Pigs, illegitimates and Bradford 606. We have a healthy mix and are a well grounded club.

Like all clubs, we have stories of tragedy and despair, like the time Marks rear oil seal blew on the way to Holland in 2009, frantically doing a road side repair, then heat seizing his engine thrashing down the M62 trying to make up time and catch the ferry, or Lee crashing into a taxi driver who did a u-turn in front of him, dragging the driver thru his window and punching his head in, all denied when the police arrived of course, even that the Doc Martin boot print on the car door was his!!, Tracey pulling onto the middle reservation of the motorway in Holland 2010, absolutely petrified, in tears and adamant she wouldn`t ride another yard, or Bob on a Discharge Grassington ride out blowing a hole in his piston on the A65 and waiting 3 hours for recovery in the rain, under a bush, these all evoke memories, and along with the good times we have, like scooterists up and down the country, that is what scootering is about, that is what being part of a club is about. 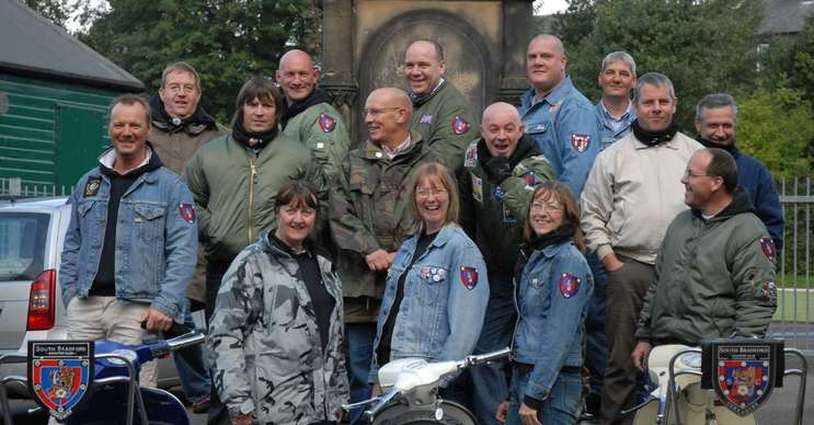 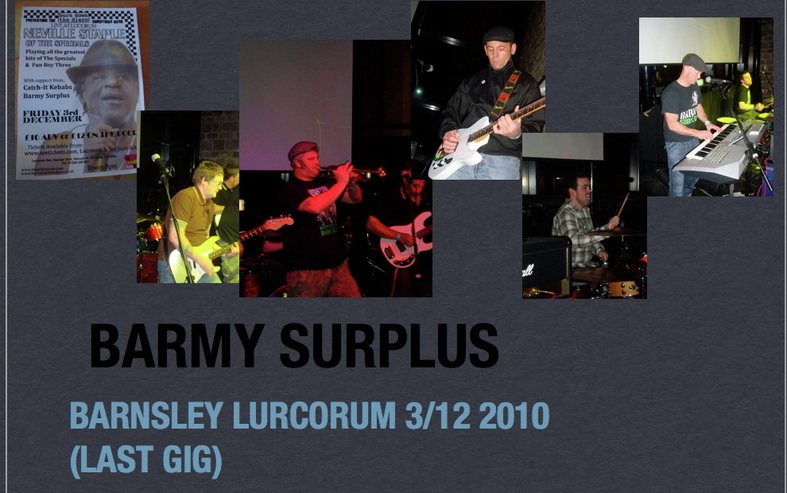 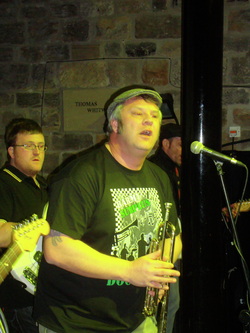 The country had seen for many years, But I think it would have taken a lot more

To cancel the bands last ever gig.

Snow and got to see the sound check and they were sounding good,

It reminds me of the old early eighties punk venue, It soon started to fill up

In great anticipation of seen jethro and the band, 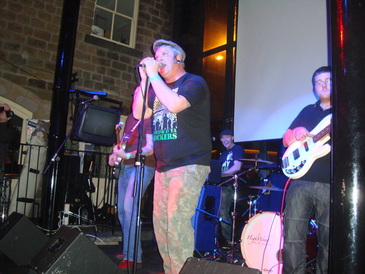 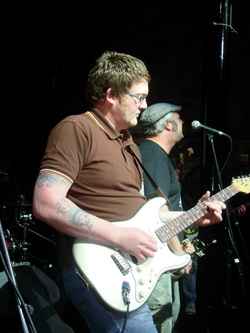 I Fought The Law which brought a lot more movement down the front of stage.

After a few problems with the monitors we got a bit of chatter while things were put right even down to jethro wanting to count how many flat caps, But then straight into Timebomb  which had the whole place bouncing,

Next we get cctv which is a true story of a druken night out and is a great song about big brother watching YOU. 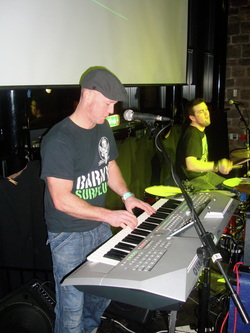 Then the sad news came this was to be the last ever song by Barmy Surplus with a big thankyou to everyone for the support over the last 5 years and we came in to the excellent song Capt Dread  a massive song I feel we have not heard enough from the Army and if this sea shanty don’t want to make you dance you must be Dead.

This gig was over so fast for me I know there was 2 more bands to come Catch it Kebads and the great Neville Staple but the 80 mile journey through the snow and ice was worth every mile, I would like to thank the band for some great gigs over the years, I know we will see them on scooter rally but wont be the same not seeing them on the stage, Hopefully one day they may reform until the 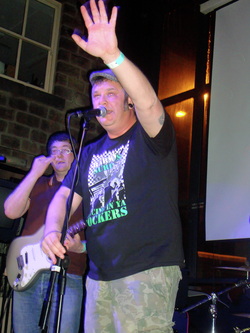