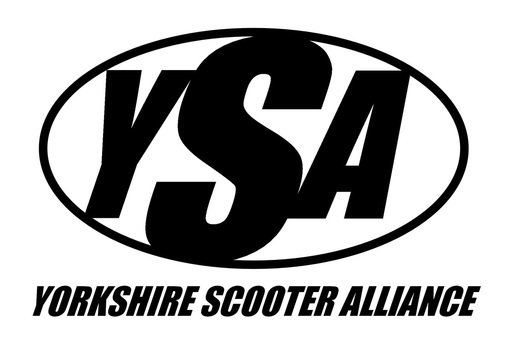 Please accept this covering letter along with a selection of Evidence as required in support of our claim for the World Record for the longest parade of Scooters.


The Yorkshire Scooter Alliance was established in 2001 as a collective of smaller Scooter Clubs from around Yorkshire with a mission to promote the scene surrounding classic and modern motor scooters. It is a non profit making organisation and supports a number of different charitable causes from time to time.


The organisation has grown successfully year on year, having approximately 4000 members and over 90 affiliated Scooter Clubs.


The Alliance organises a number of Rallies each year in the UK and also in Europe which attract many attendees – our flagship event in 2010 was attended by over 1,800 people.


As part of our annual “Coast to Coast” run we decided to make an attempt at the World Record for the “Largest Parade of Scooters” and work began to find a suitable location based on the stipulations provided by Guinness. 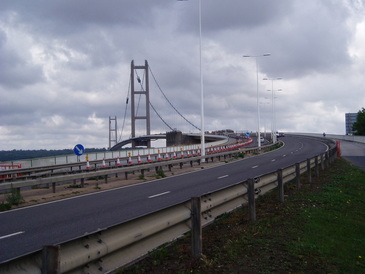 The Humber Bridge Board were very helpful in supporting our attempt, taking great interest in the stipulations made by Guinness, and were prepared to assist us in many ways –most significantly they allowed us to use the entire southbound car park with its own unique access to the bridge, and their maintenance department fully coned off a the nearside lane of the bridge for our exclusive use on the day.

The actual run would take us from the southbound car park, onto the slip road, and then over the bridge, a length of 2450 metres, and then a further 850 metres along the trunk road to finish line adjacent to the slip road for the nearby village of Barton Upon Humber. The whole event culminated in an after party to be held in Cleethorpes, Lincolnshire, co-organised by a fellow group, Grimsby and Cleethorpes Scooter Scene.


The local Police and Bridge Board officials with road safety in mind asked us to keep our speed appropriate to the limit on the Bridge (40mph) and considering the age of some machines and their braking capabilities, keep an appropriate distance between each machine

The officials representing the YSA were as follows:


The appointed Independent Witnesses were as follows:


In addition around 35 official marshals were appointed

An official Photographer was appointed in Mr Les Pigg from Gateshead who was to supply quality images before and during the ride. He also offered to supply a DVD Video of the ride showing each scooter.

Mr Pigg selected a vantage point at the end of the bridge approximately 900m from the finish line.

All local and national media were contacted with a press release approximately 4 weeks prior to the event. There was obviously a good deal of interest from the mauin UK based Scooter orientated publications, “Classic Scooterist Scene” and “Scootering” both of which attended the event to cover for future publications. There was also coverage from the BBC on their” Look North” programme on the day itself.

Much of the media interest prior to the event was based around the participation of the Kaiser Chiefs guitarist Andrew White – a keen YSA Scooterist.

As scooters arrived at the event, they were marshalled efficiently into rows facing the starting line at the beginning of the slip road. Each row consisted of around 25 to 30 machines. 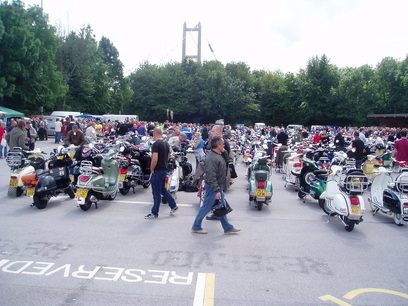 Parking in rows in the main Car park

One lead Scooter was appointed and the scooters were to be marshalled out of the car park in rows. As the number of machines grew, a second car park was utilised

with a similar parking system. Marshals taking part in the ride parked in a central reservation on the slip road ready to join the back of the ride

All participants were required to fill in a registration ticket, which included all the relevant information about themselves and their scooter details 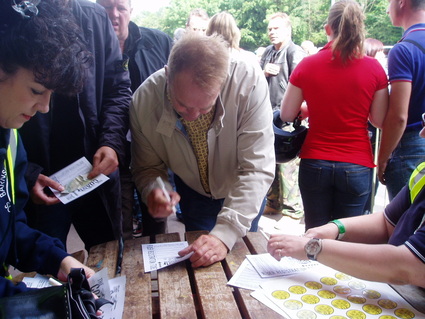 Each and every ticket was initialled by the appointed official, marked with a number and the rider issued with a matching number sticker to display on the front of their machine. All riders were individually advised of the rules stipulated by Guinness and the additional stipulations made by the Police and the Bridge Board. 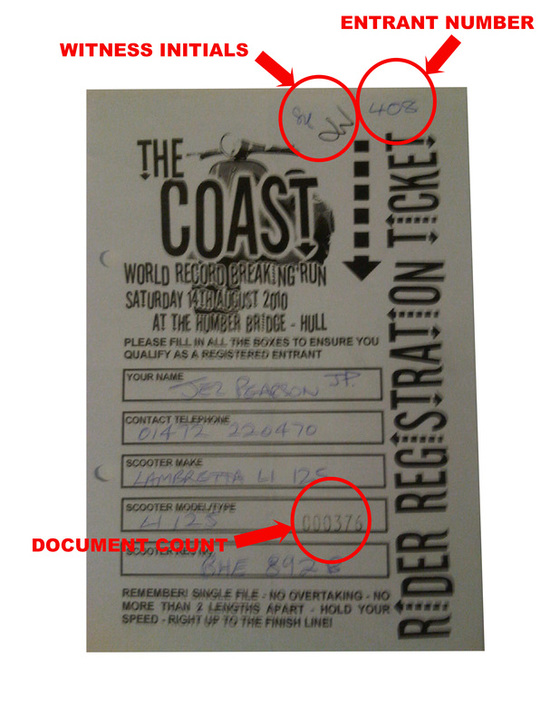 Above is shown an example of the ticketing system showing the Witness Initials, Entrant Number and the sequential Document Count. This system was used successfully to register all 860 riders and machines in a period between 11am and 2.15pm on 14th August 2010. 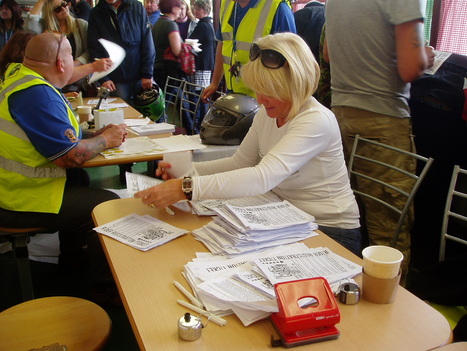 The purpose of the sticker was to make it easy to eliminate any machine that withdrew from the ride, broke down or broke any rules. The corresponding ticket could then be removed from the register and marked according to reason for disqualification or withdrawal. 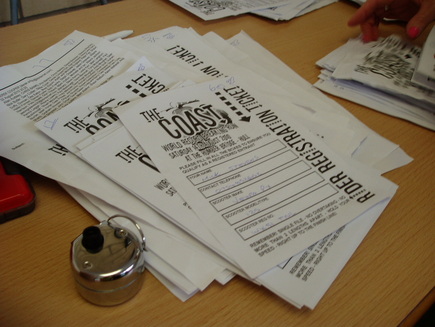 Any “spurious” machines (three wheelers, choppers, machines with centre tanks) were segregated to ride through after all more conventional machines. These also included a Piaggio Ape – a scooter but with the appearance of a small commercial van. As a Scootering organisation we recognise all these spurious vehicles as scooters, but nonetheless decided it best to make them take the rear.

Gathering in main car park prior to departure

The riders were called to their machines at 2.00pm and the two female witnesses made their way to the finish line by car. Mr Williams took position at the end of the slip road at 2.15pm. The Marshals prepared themselves for the start of the ride and to usher the machines out in their rows starting with the main car park.

At 2.25pm the riders were instructed to start engines in the main car park and at precisely 2.30pm Derek Cooper led the first row of machines out onto the slip road. 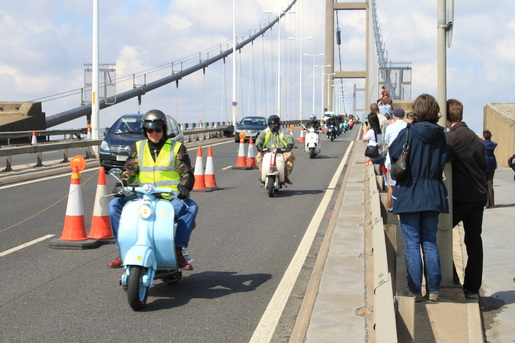 All ran very smoothly and all the machines passed out of the main car park without a problem. The second car park joined the procession in the same manner and without problem, with the spurious machines and back up support vehicles following on.

Four machines followed the back up vehicles however these were found to be non- registered machines and we are not claiming for these as part of the record.

Mr Williams counted all the machines onto the bridge with the aid of a click counter and checked that the machines were in an unbroken procession without significant gaps.

Marshals positioned at strategic points along the length of the route were there in case of breakdowns and to encourage riders to hold speed and maintain distance.

At around 3pm all the Scooters had successfully completed the ride in an unbroken procession and crossed the finish line at Barton upon Humber, witnessed by Mrs Kemp and Mrs Barber using similar click counters. 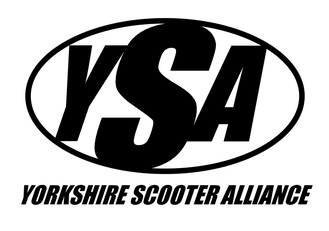 Our claim is that on Saturday August 14th 2010 860 Scooters successfully completed an unbroken procession in accordance with Guinness rules over the Humber Bridge, Hull

On behalf of the Yorkshire Scooter Alliance 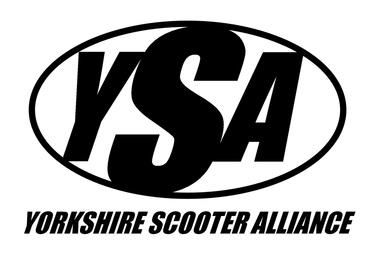